After two months of testing, evaluating, breaking and fixing we've decided to finally upload memeReactor to the Android Market.

We are going to push one more update via our custom memeReactor mechanism on the 9th of February and later that day we will upload memeReactor to the market (yay!).

The changes we've made:

Thank you all for your participation in beta testing memeReactor! We still owe you some t-shirts so expect a little "contest" in the next few days.
Thanks!
Vystavil Tomáš Zvěřina v 7:20 Žádné komentáře:

A new version of memeReactor is out! Changes:


Comming up next:
We are still working on how to solve comments. Any ideas?
Download here:
http://repository.m-atelier.cz/beta/meme-reactor.apk
Vystavil Tomáš Zvěřina v 8:51 Žádné komentáře:

In the new version of memeReactor you can decide how many notifications you want to receive. Just click the "preferences" button on the notification screen. You can also push the menu button, or touch the memeReactor logo - all lead to the same "dashboard".

On this dashboard you can display help comics - useful when you want to show somebody what the memeReactor is. You can also share this app with your friends - please do! Reactor needs fresh blood.

But the most important feature of all: 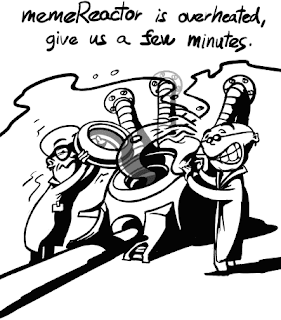 Let's look at what we're going to implement next:

This is a sensitive topic. Comments are generally a source of huge amount of garbage. As we see it, comments in memeReactor should prove themselves good enough to be noticed and should go through the same evaluation process as memes do. Notification about these "comment-memes" will preferably be sent to the author of the original idea and people who were involved in its evaluation.

Android App should display these comments close to the original meme in some nice and synoptical way - sure thing.

Many of you were asking about different languages in memeReactor. This is how it's going to be: During registration, users get to choose what language they speak - but in most cases we will guess it correctly from their smartphone settings. memeReactor will detect the language of every idea, and will send it only to the users who speaks the same language. Also the list of "recently exploded" memes will reflect your language preference.

This one will be more difficult, but there are ways to recognize topic of each post. The notification mechanism will take into consideration your interests and only send stuff that matters to you. "Recently exploded" memes will reflect your preferences - so each user will see a different list of exploded memes. For now, if you want to help us out, use Twitter-style hashtags in your posts.

Very soon @memereactor will post every exploded meme to its Twitter account. Any of your tweets, marked with #mr hashtag, will automatically be sent to the reactor - no need to write the same thing more than once, right?

memeReactor is not a toy people! With every post you are asking a community of users to think about what you've said. Later, when there is more of us, some of the users will just post anything. If a user submits too many uninteresting posts, his access to the reactor will be limited - initially let's say one post per day or so.
Vystavil Tomáš Zvěřina v 14:24 Žádné komentáře: